On the 4th March, 57 cyclists and 1 unicyclist lined up to see just which is the best college at Cycling.(perhaps surprisingly, it isn’t Girton) With some very fast times laid down already in the season so far by people new and old, it was going to be an interesting race!

The format as always was a 10 mile Time trial- everyone is timed round the same course, and the fastest time wins! It is called the ‘race of truth’ because there is simply nowhere to hide- you can’t sprint past someone at the end, you can’t take it easy whilst no one is looking, and you have no real idea how anyone else is doing apart from brief glimpses of others around the course. 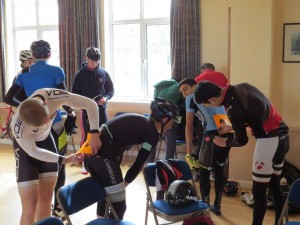 Checking out the Competition (wit right there)

To look forward to at the end there were some lovingly handcrafted trophies (courtesy of the Eng. Dept. workshops) and various burger based foods. 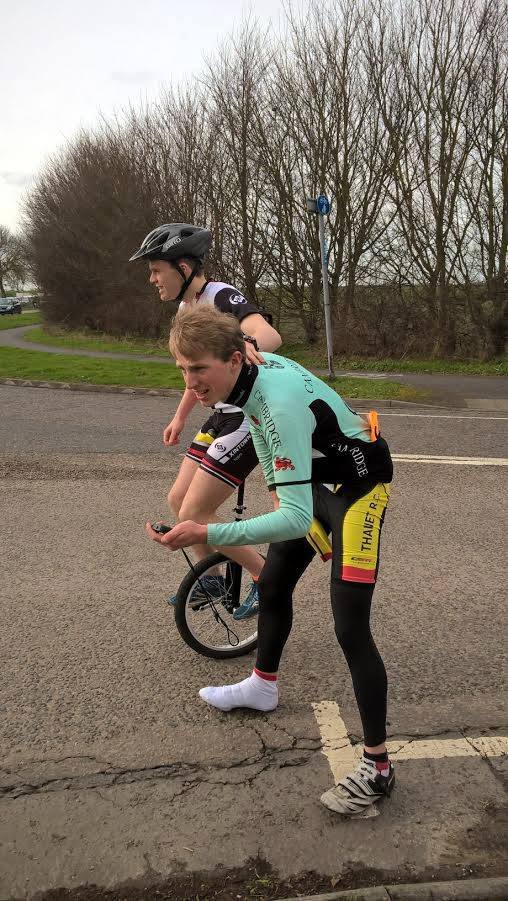 Dan Hayes was (Pembroke) first off astride a Unicycle. The only rider in his category (Unicycle), the main aim was to finish, and despite being overtaken by every single other person, his time of 1:53:00 is still the fastest (and as yet only) time in CUCC records, earning adulation as a hero and bemusement in perhaps equal measure! 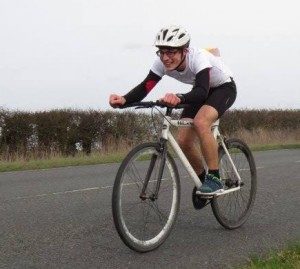 The fastest person on a Town Bike was Dan Eatough, of Corpus Christi. Spurring him on to a fast time was the prospect of having to get back to cox Corpus M1 in Bumps. More usually seen playing mixed lacrosse for the Uni, he recorded a time of 28:22- averaging well over 20mph! This probably implies he is more used than he should be to leaving late for lectures and having to pound it all the way there…

Triathlete James Kershaw (Emmanuel) was the fastest person on a standard road bike with a time of 25:01, closely followed by George Vousden just 10 seconds back.

The top 10 was, however, a case of more specialist equipment. With Cuppers being used as a crucial metric for BUCS and Varsity selection, people werent taking any chances. Only the fastest 3 at Varsity will get Half blues.

Current Women’s Captain Jess Atkinson, riding Social Sec Lottie’s bike, came through with a time of 25:07 to clearly take the womens event- authority intact! 7 other women also raced, with Hannah Evans recording an impressive 28.25 to take the second place on a road bike, and 9 points for Selwyn.
In third was Rachel Elwood (Caius) , just missing out on the 30 minute marker by 10 seconds. It was quite close after that with Cloudy Carnegie and Sasha Bailey separated by just 3 seconds in 4th and 5th with times for the course of 30:54 and 30:57. With those sorts of time gaps, just small errors of pacing up hills can make the difference! Nancy John did 31:28 and just 19 seconds back was Holly Knox (Newnham).

In the mens event, the older riders had to face up against a fresher onslaught. An impressive performance came from Jali Packer, who despite having broken his collarbone and trained nothing but his liver, then broken his bike so the saddle wouldnt stay up, came round in 24:21. 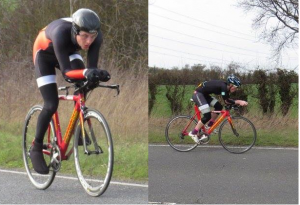 Who rode it better? (Toby did.)

In one of the more remarkable shows of College unity, Catz Combo of Tom Simpson (MTB Sec) and Toby Cowell (another fresher) rode the same bike, one after the other. Despite slightly marred by Tom seeming to apparently ride off with it just before Toby’s start. In the end, they came in separated by just 9 seconds recording 23:55 and 23:42 for 8th and 9th respectively.

After that, there was a dense pack of results, with older members trying to hold off a fresher onslaught.
For the old guard, John Grenfel Shaw (Trinity) set a firm declaration of intent ahead of his second racing season. A key member of the 2016 Seconds team, he laid down a time of 22:07. Although this in previous years would have been enough to win it, this was ‘only’ good enough for 5th this year, showing the high quality of the squad this year. However, he has a much nicer bike to ride for the next race, will this make the difference?

Ahead of him by only 8 seconds was another fresher Ali Golby, of Jesus. Despite viral bronchitis (verified when he coughed all over start time keeper Seb), he turned up anyway and recorded a pretty spectacular 21:59 (average speed: 27.2mph )to just nudge under the 22 minute mark. He also had the best gurn on. Taking up the challenge for last year was Hal Bradbury (also Jesus). A 2016 Half Blue and top 10 BUCS finisher, not to mention ex Goldie rower, he stormed round to record a time of …21:59. Probably the second most impressive feat of college unity on the day there from the Jesus boys, their joint 3rd place and the points that went with it were enough to bring home the Trophy for Jesus.

‘Promising Fresher’ Rob Walker of Pembroke was just 9 seconds ahead in 21:50, despite losing 20 seconds to dropping a chain about 6 miles in and having to get off to replace it. This meant that in the space of 2 weeks he earnt the honour of being Cambridge’s second fastest Mountain biker and Time triallist. 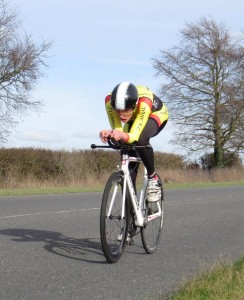 Seeing off all opposition on the day, Club President and Full Blue Seb Dickson, of Corpus. In a dubious misuse of authority, he persuaded Ryan Pringle to lend him his front wheel, and took 48 seconds off Robs time to record 21:02, an average speed of 28.6mph.

The only thing that is certain is that BUCS selection is going to be very difficult this year, and it is anyone’s guess who will be in the top 3 Spots come varsity in just 5 weeks and getting their half blues.

Jesus Won the overall, with the 3rd place duo of Hal and Ali being joined by Joe Sherwood to bring an unassailable 16 points. In joint second were Catz and Caius, just edged out by Corpus.

A huge thanks to everyone who rode, and also to all the folks that helped out on the day. Full results can be found here: Cuppers Final Results 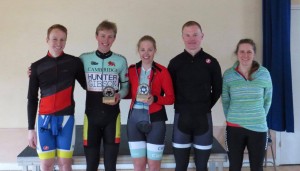