Cambridge had a successful day at the BUCS TTT, with the Men’s A team winning with a new course record and the Men’s B and Women’s A teams both placing third and setting times that would have seen them win previous events. Read on for a race report by Ali Golby. 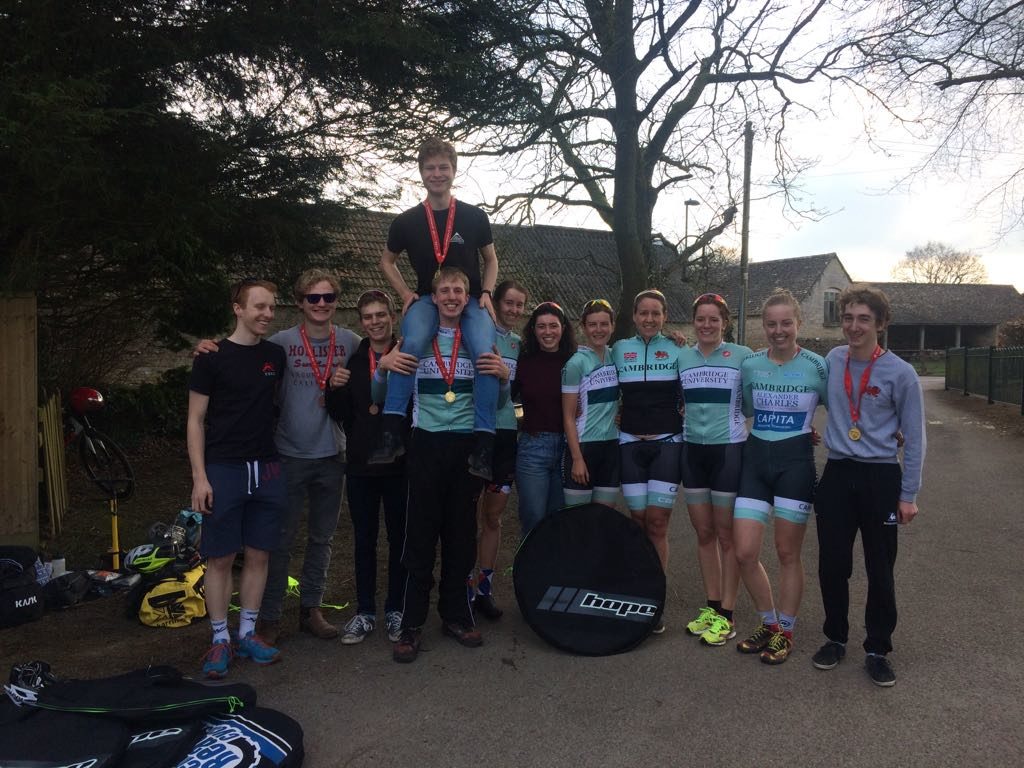 Cambridge sent two men’s teams and two women’s teams to compete the BUCS TTT championship on an undulating 22 mile course around Castle Combe in the Southern Cotswolds. A warm, sunny day (for a change) with only a light breeze promised fast times, and straightaway the men’s B team (Rob Walker, Jack Brown and Ali Golby) laid down a statement of intent with and early marker of 48.08- a time that would have been fast enough to win last year’s event. They also laid themselves down, quite literally, on a verge just after the finish, unable to stand after their exertion. However, this was short lived as the men’s A team (Felix Barker, Seb Dickson and ‘The Incredible’ John Mulvey) demonstrated why they have over 20 BUCS medals between them and annihilated the course record with a remarkable 46.39, even managing a cheeky wave to the onlookers as they passed the start line after their first lap. When the dust had settled, the A team had taken the win, whilst the B team had to settle for bronze, falling six seconds short of the time set by a strong Derby outfit. 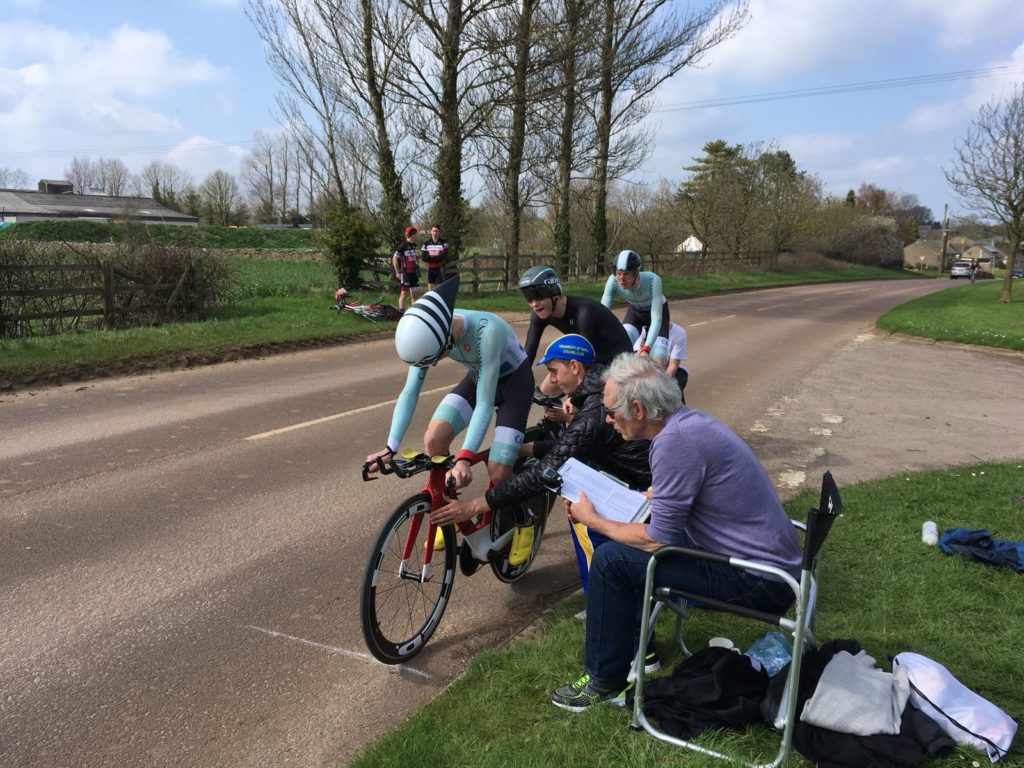 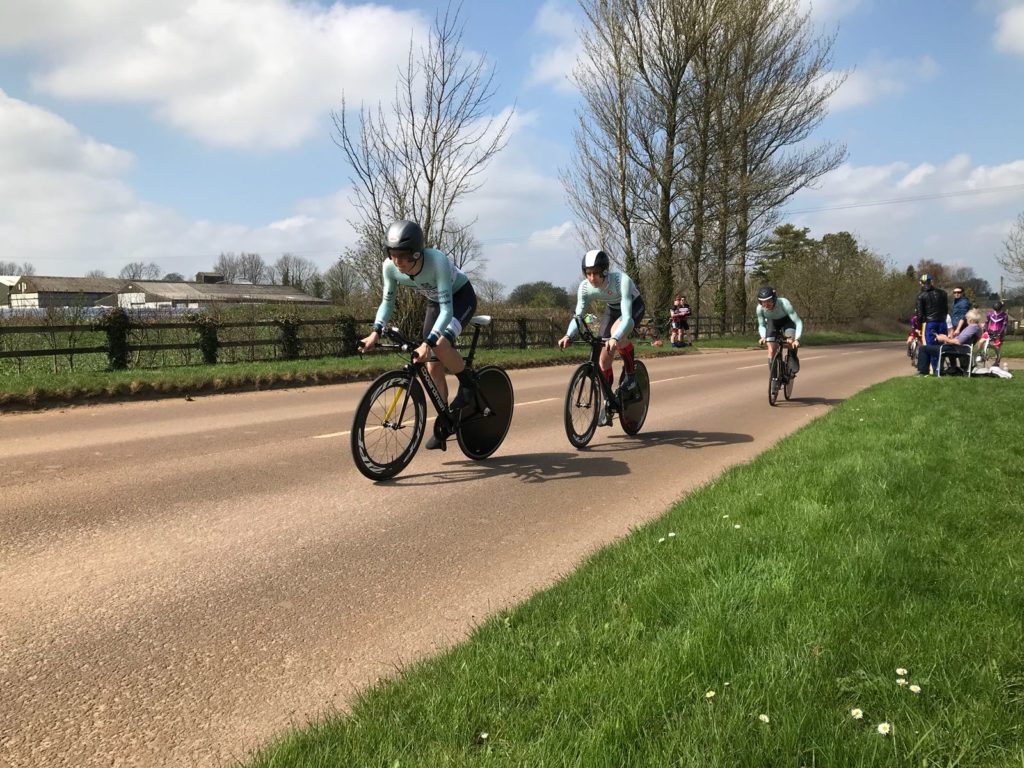 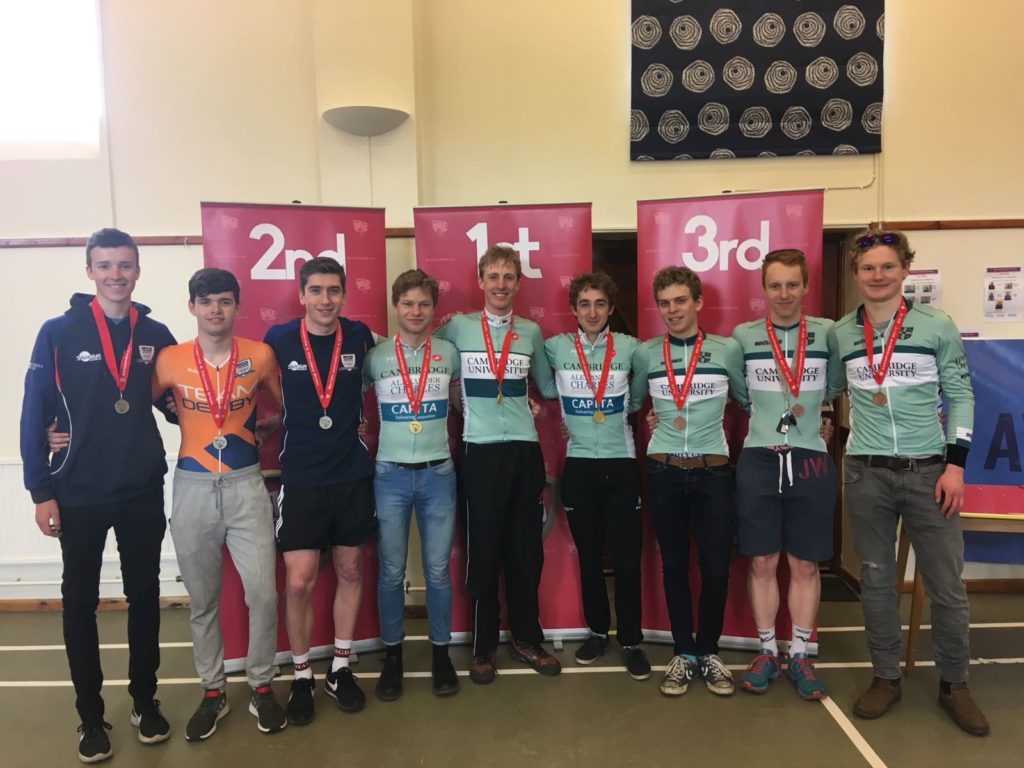 In the women’s competition, the B team (Emilie Lostis, Aine Cahill and Olivia Jamrog) were first off, putting in a well-paced ride to finish with a respectable time of 1.07.06. To put their ride into context, they were riding on road bikes with clip-on bars, standard helmets and wheels, and jerseys as opposed to skinsuits and other aero kit, so well done for putting in a competitive time against teams equipped with more specialist kit. The women’s A team went into the event with high hopes, with a strong trio of President Jess Atkinson, Ffion James and Carrie Beddingfield. They put in a strong start and managed to hold on through the tough final few miles to challenge for the win, posting a very competitive time of 57.33, which would have been good enough for victory in any of the previous renditions. Unfortunately, however, Oxford just managed to sneak under this marker, and Bristol (powered by ex CUCC member Lottie Mallin-Martin) posted a remarkable time of 56.20 to snatch the victory. Nevertheless, the women held on for a very well-deserved bronze medal to round off a very successful day for CUCC. 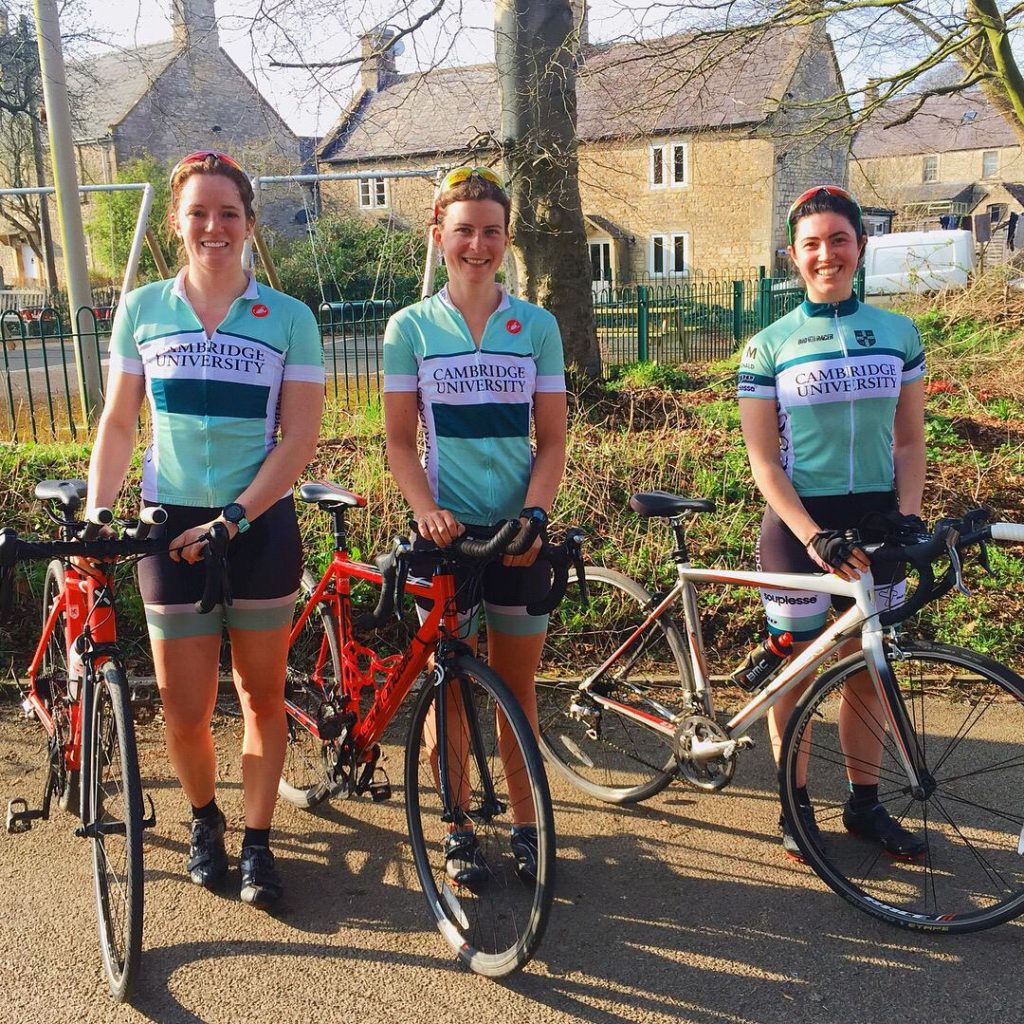 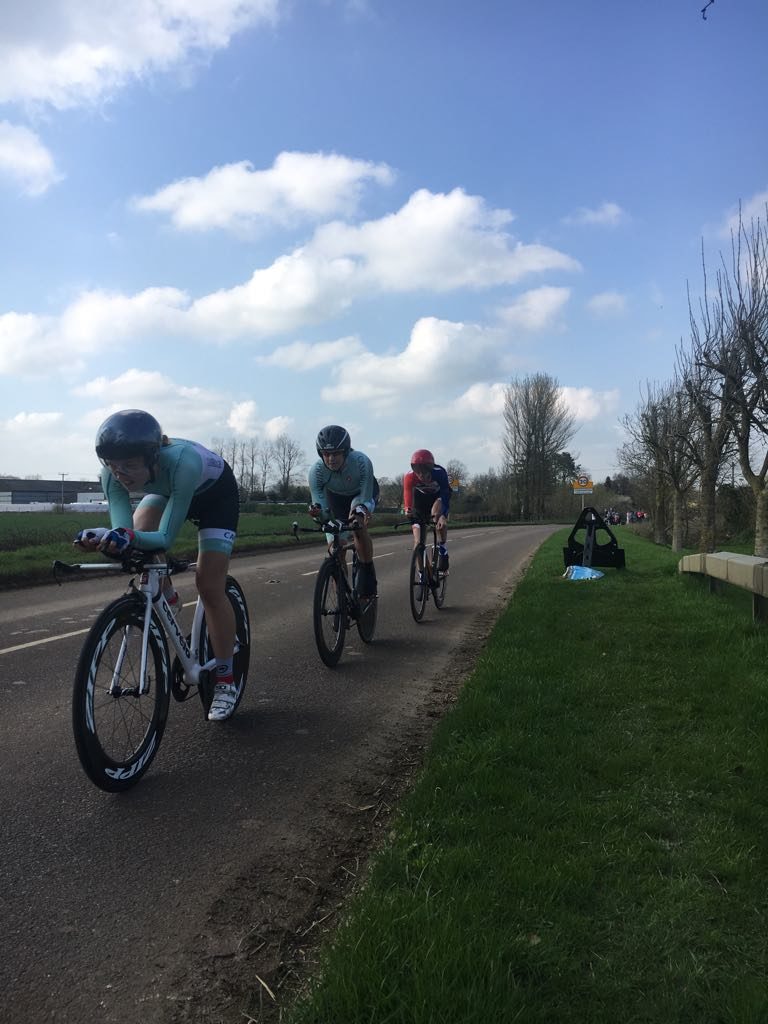 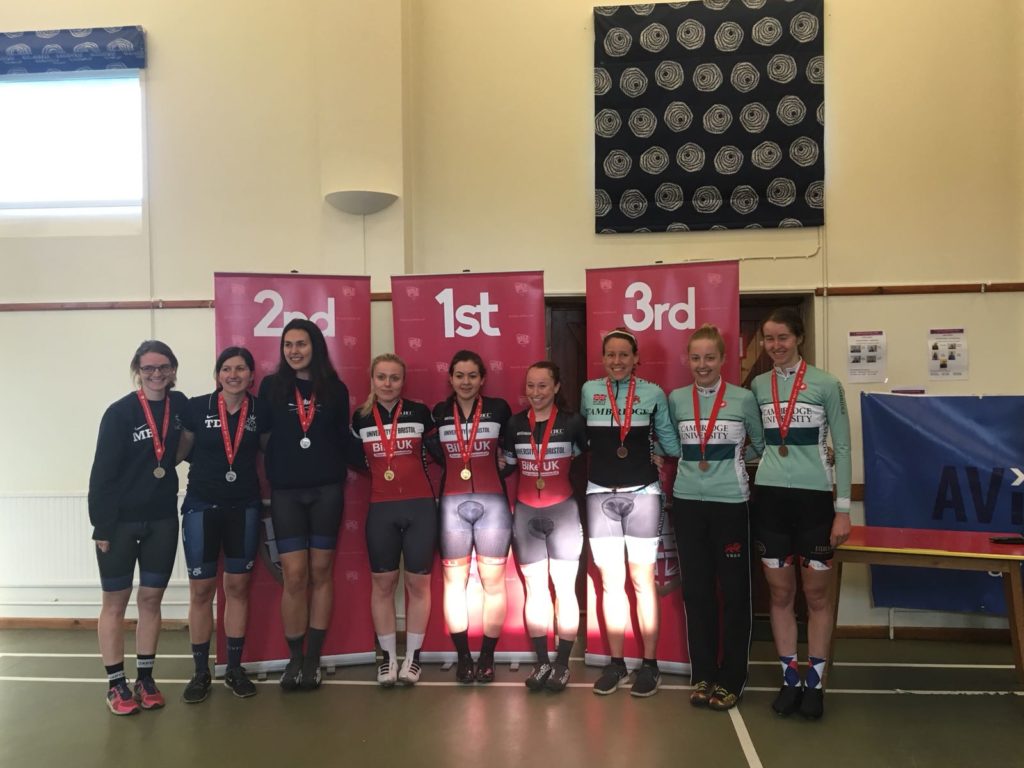