On Sunday 3rd of April, while most eyes were focused on the Cambridge-Oxford boat race, BUCS 25-mile TT returned to the roads of Cambridgeshire. With one-hundred-one students competing from universities across the country, it looked set to be an exciting race on CUCC’s home turf. Furthermore, with Oxford able to attend this year, BUCS 25 doubled up as the cycling varsity match. Cambridge came prepared for the challenge putting forward a strong team of eighteen men and four women.

The day started with the women, the first rider off for Cambridge was Maddie Angwin. Completing her first 25 mile TT, although, with a couple of hilly TTs under her belt (helpful on the last brutal straight of the Botty triangle), Maddie put out an impressive time of 1:09:34. Next up was Phoebe Barker who despite being on a road bike set-up put down the power and achieved an absolutely rapid time of 1:04:31. Experienced racer Charlotte Brass, was Cambridge’s third rider completed the course in 1:11:47. Zoe Burrell was the final rider of the women’s team narrowly making her start, she finished with a time of 1:04:11. This gave the women’s team a competitive time of 2:08:42, just 3 seconds off a podium position. There was also individual success for Maddie, Phoebe and Zoe who also achieved their half blue! 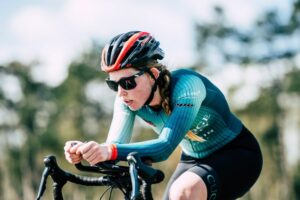 The Cambridge men’s B team this year were well equipped with new TT bikes making an inaugural appearance for Joe Adlam-Cook and James Cummins who achieved times of 56:03 and 55:49 respectively. The team was completed by Jack Kellam who flew round, completing the course in 54:37, this gave the trio a team time of 2:46:29. 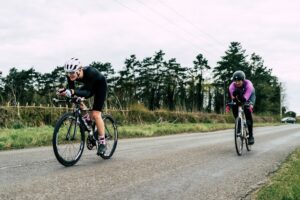 Matt R-N on the overtake! (@kanelssmith)

Even faster were Joris Wistok, George Spooner and Theo Weinberger who made up the men’s A team. Joris zipped round the course with an impressive time of 54:03 just three seconds off George Spooner’s time of 54:00. George had already had considerable success in BUCS events this season coming second overall in the Hill Climb late last year and had spent the evening before organising the delivery of a huge pile of skinsuits for all those racing. Fastest rider for Cambridge was Theo Weinberger with an undeniably quick time of 53:19 placing him an impressive 10th in the individual results. We won’t mention that was just eight seconds slower than brother and Oxford student Harvey Weinberger! This together gave the men a collective team time of 2:41:22, just two seconds off 3rd place on the men’s team podium!

As the day came to a close and the award ceremony was completed, there was Varsity Dinner to look forward to and Varsity results to announce. Unfortunately, this year it was not to be with Oxford taking all of the wins in the Varsity match, their super strong team of both men and women putting down some amazing rides across the board. Despite this, I am sure all involved would agree that it was a fantastic day with great results and an amazing atmosphere. It would not have been possible without the huge effort from all the volunteers, in particular James Quigley and Joe Lunn whose unparalleled organisation skills saw that the day was a smooth success!