The early days and CUBiC

The Cambridge University Bicycle Club (CUBiC) came into being on the 28th of February 1874 with 11 members; within five years this figure was in excess of 260 and included all members of the University from undergraduates to Fellows. The objective of the club was very clear from the outset,  being "to encourage proficiency in Bicycling among members of the University, by arranging for races &c.". Within two months of CUBiC's formation, the Dark Blue Bicycle Club requested the first inter-varsity race. This inaugural race was held on the 18th June 1874, and consisted of an 80 mile course between Oxford and Cambridge. Cambridge won, with first and second places being taken by Edward St John Mildmay (Trinity) and John Plunkett (Trinity). 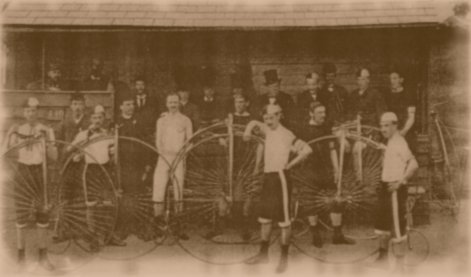 CUBiC went from strength to strength in the early days, very quickly acquiring a club room off St Andrews St (November 1875), and a "man to be on the spot all day" at the club room (February 1876). A Timberlake high bicycle was bought by the club for members' use and, in March 1877, an agreement was reached with the Coventry Machinists Company, manufacturer of "unequalled [high] bicycles", that would allow CUBiC members a 15% discount on high bicycles bought either directly from them, or from their Cambridge agent, John Howes (the same Howes that is still on Regents St today). The original Timberlake was quickly broken and a more robust version ordered! By the second quarter of 1877, CUBiC had built their own gravel racing track on what is now the northern part of Robinson College; the amateur racing scene became increasingly spirited, with some track racing and local hillclimbs opened up to local, non professional, riders. By the late 1870s, one of the members of CUBiC, the Hon. Ion Keith-Falconer (Trinity) was the amateur champion of Great Britain.

The club went from strength to strength through the 1880s, with amateur (notably not professional) racing flourishing. After a roughly three-year period of debate and negotiation, the awarding of the first 'blues' was permitted by the University Boat Club; cycling now had equal status with the 'established' sports. The organisation of the club, and to rules to which is was run, was held in high regard with Oxford University and a club in New Zealand adopting them. The increasing activity within the club had a knock-on effect on the servicing and storage requirements, such that the demand on Howe's services was too great. An extra hand was hired, Mr Liddiard; he was trained in the art of repair at the Coventry Machinist's factory and accompanied Mr Page in the more menial tasks of running the club.

The explosive growth of CUBiC was, in hindsight, relatively short-lived. The lease for the ground on which the gravel track was placed was not renewed in 1898 since, by that time, the club was already in decline. This trend was reflected across other cycling clubs within Great Britain. The situation worsened at the turn of the century, with Oxford having to reorganise their own club in 1905. CUBiC recorded a financial deficit in 1906 and 1907 saw the cessation of use of the club room. Membership fell to zero, and the CUBiC was dissolved. No one reason has been proposed for this dramatic decline, although it is likely that, with the advent of the motor car, the pursuits of the upper classes had shifted away from cycling to the glamour of motor sport.

It was not until the early 1950s that cycling made a return to the Cambridge sports scene.