On Saturday the 9th April it was the BUCS 10 Mile Time Trial Championships, held just outside Oxford. The format of the racing, a time trial, sees each competitor try and lay down the fastest time they can around the 10 mile course. On top of this, the Team medals would be awarded on the combined times of the fastest 3 from each University.

In the Men’s Competition 48 Universities were represented and 7 Cambridge riders qualified – fewer than the year before. The Women had 4 qualify for their event, but bad luck (and shoulder dislocations!) lead to just 2 taking the start. With only one rider seeded, both men and women were regarded as outsiders for the titles- one person from a Scottish University even forecasting that Cambridge ‘would go off a bit of a cliff’ this year and stood no chance- laying down a bit of a challenge!

With one rider put off every minute it would be 3 hours before all the times were in, making for an anxious wait to see how riders compared. Soon, however, it began to show that the Cambridge Men were doing pretty well! The fastest time crawled slowly downwards throughout the course of the afternoon, until it came to a halt with Cambridge’s Oliver Mytton setting a new fastest time of 20:23 with 110 people still to go. This ended up standing unchallenged for over half an hour- despite some seeded people coming and going, the person coming closest was Fresher Ali Golby, 9 seconds back in his first showing for Cambridge.

When it did fall (sad) it was to another Cambridge rider (good) Hal Bradbury, a Half Blue from 2016, took over half a minute off in one go, breaking the 30mph barrier for the first time in 19:52. For 40 minutes, this was the fastest time from anyone (although 6th Seed James Hayden of Brunel exactly equalled it). It was then Men’s Captain John Mulvey’s turn to take the start. In all the races done in the build up to BUCS he had always been just on the wrong side of Hal, but turned this around when it counted to go just 5 seconds faster and with it take the overall lead.

CUCC President Seb Dickson was the last of the men to go- having to borrow a wheel after finding a puncture just before his start. The silver medal winner from 2015, he hadn’t quite found that form in 2016 so took to the start with something to prove- and in the end laid down a time of 19:29 (an average speed of 30.7mph)  continuing the pattern of the only person able to unseat a Cambridge rider being another Cambridge rider. At that point despite what the others had been prophesying before the start, we sat in a scarcely believable 1st, 2ndand 3rd. However, there were still 15 people to go so nothing was quite certain. Last Man off was pre race favourite Matt Langworthy (Imperial College). He was 2s faster to the halfway point, but he lost time on a slight hill with 2 miles to go, meaning he eventually fell just 3 seconds short of beating Seb for the Championship victory.

Rather astonishingly, at the final reckoning, Seb Dickson took the Gold (19:29), John Mulvey got Bronze (19:47) with Hal just further back in 4th (19:52).  With such a show of dominance, this meant they romped to the Team victory (on aggregate time of 3 riders) in a Championship record (breaking one held by Cambridge from 2 years prior) and the first time ever all three members of a University team had averaged over 30mph. 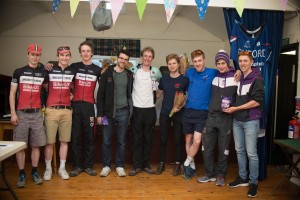 Even more astonishingly, with Cambridge men also placing 11th (Oli Mytton, 20.23), 14th (Ali Golby, 20.30), and 16th (Christopher Revell, 20.36) and no other Universities having more than one person into the top 20 (as opposed to our 6), the Cambridge 2nd Team placed second fastest team on the day: ahead of all other Universities’ First teams- including old rivals Loughborough! Commiserations to John Grenfell- Shaw, who in 22nd, just missed out on counting for the Seconds.

A quick look at the history books shows that  no University squad has ever done that well in any event ever before. However, this was soon soured when BUCS decided that ‘it isn’t fair for one university to take all the medals and BUCS points’ so effectively DQ’d the Seconds from counting and reallocated the medals. This was a bitter and unexpected blow given that second teams have counted in every single one of the past 11 years.

The Cambridge women were more of an unknown going into the championships, with women’s captain Jess Atkinson’s only previous experience of a TT at Cuppers in March (25.07), and Lottie Mallin-Martin’s PB (25.37) set two years ago, also at BUCS. Moral was high following the success of the men’s rides, so all that was left was to give it some beans and hope for the best! Both Lottie and Jess came away with massive PBs and finished well inside the top 10 in – 23.08 (5th) and 23.13 (6th) respectively which was enough to secure 3rd place in the team competition behind Birmingham and Oxford.

With the 25 mile BUCS TT championships (incorporating the Varsity Match) and BUCS team time trial championships coming up over the next few weeks, it is looking like BUCS cycling will be painted light blue this season.