Rob Walker and Seb Dickson travelled down to near Bristol for the National Circuit Championships, with the aim of collecting a top 50 to accomplish their full blues.

With Rob having his end of term project just finished and Seb finally getting round to doing the whole finish a degree thing (‘both the most and least anticipated event of the year’) with finals, masters dissertation write up etc neither had the sharpest legs.

The course was the same used for the BUCS TTT – a technical and somewhat lumpy if scenic romp around the roads near Tomarton.  There was varying familiarity with the course – Seb from his 5 previous appearances in that event and Rob from a previous 2 (even if on the second appearance he got confused by a slight corner perniciously pretending to be a straight road and cycled off the side of it. See: BUCS TTT 2019). However, unlike the BUCS TTT  this turned out to be two laps  (40miles), a rather different proposition for the inherently lazy who like their bike races to be over quickly so they can get back to eating cake.

In the end, the very strong field on paper was hollowed out slightly by misfortune, with world tour pro Harry Tanfield having exceptionally poor luck to puncture cycling to the start, and even worse luck to do that next to Seb, whose cheery offer of an out of true 10 speed mavic aksium with a seized freehub was summarily disregarded by the Katusha Alpecin rider.

Rob set a time of 1:30:54 round the course, managing not to get foxed by mischievous ‘roads with slight changes of direction’ and this was good enough for 13th on the day, beating many impressive names, and easily clearing the barrier to converting his half blue from winning the varsity match for his maiden full blue.

Seb  could only find one sock and no overshoes or skinsuit having been too hungover packing the day before. He further thought he’d prove that testing your race nutrition strategy before hand is a good idea by not doing so; chugging his first gel in about 4 years then throwing it back up 10 miles later along with his breakfast, all over the skinsuit he had borrowed that morning. As such, there is not much photographic evidence of the assymetric vommity twit. Despite this, he did 1:27:24 and clung on for 7th, getting his final full blue to add to the previous 2 and a half.

It now just remains for John Mulvey to attempt his and they will get the full set! 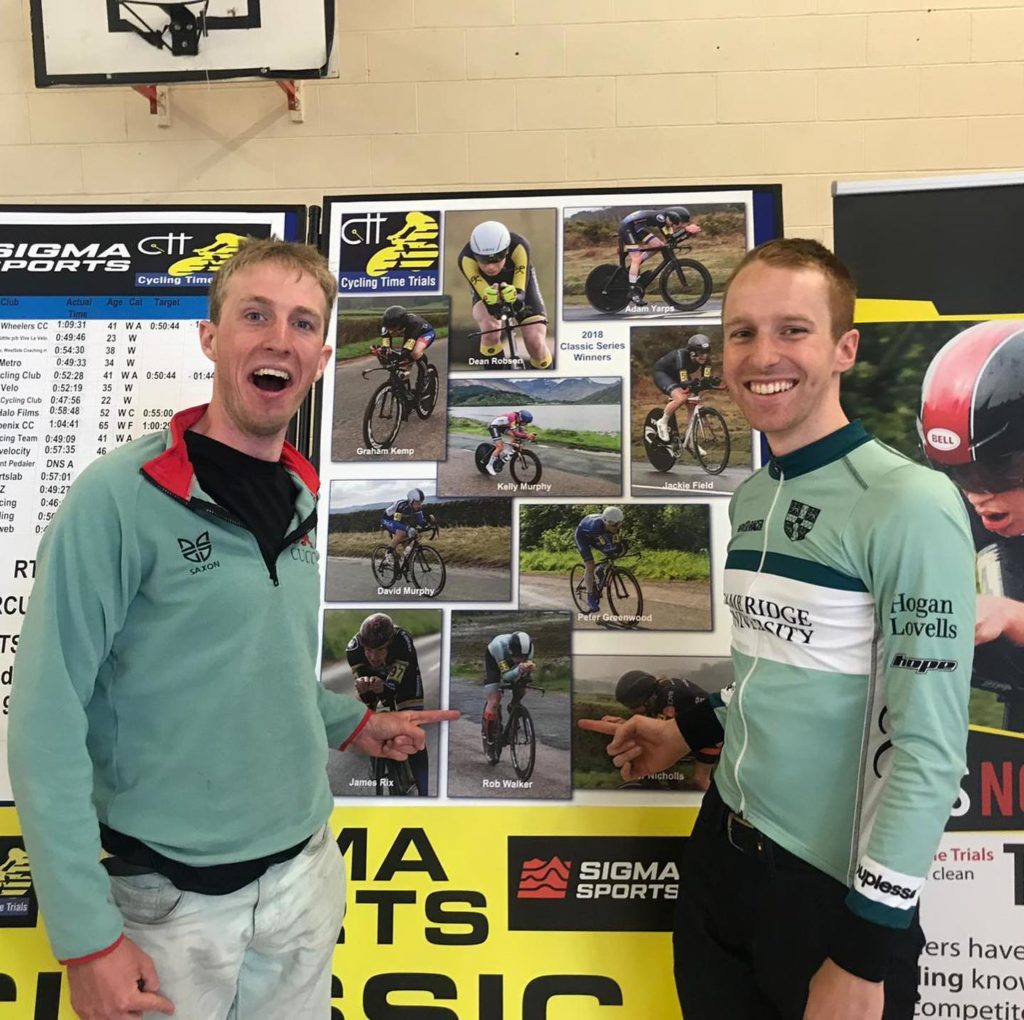 Seb and Rob at the Circuit Champs